On July 22, 2019 the Martin House Restoration Corp announced that the restoration of Frank Lloyd Wright’s Martin House in the Parkside neighborhood of Buffalo New York was complete.

Martin House was built by the celebrated American architect in his distinctive Prairie School style, for Darwin and Isabelle Martin between 1903 and 1905. Darwin Martin was a businessman and a Wright benefactor and had commissioned Wright to build the Martin family house when Wright was going through a rough patch.

Over the years, the building, which in the late 80s had been declared a National Historic Monument, had fallen to disrepair.

According to a report in The Buffalo News, it was former Senator Daniel Patrick Moynihan who visited the house and was so appalled by its condition that he motivated the community to embark on a project to restore to a tourism- and guided tour worthy state, what had five years earlier been.

The project took close to three decades to complete and cost about $50 million but stands today as a must-see in the Buffalo tourism circuit.

Once the landscaping -- the final step in the restoration process was done -- Governor Andrew Cuomo announced the completion of the restored Frank Lloyd Wright-designed New York State Historic Site. 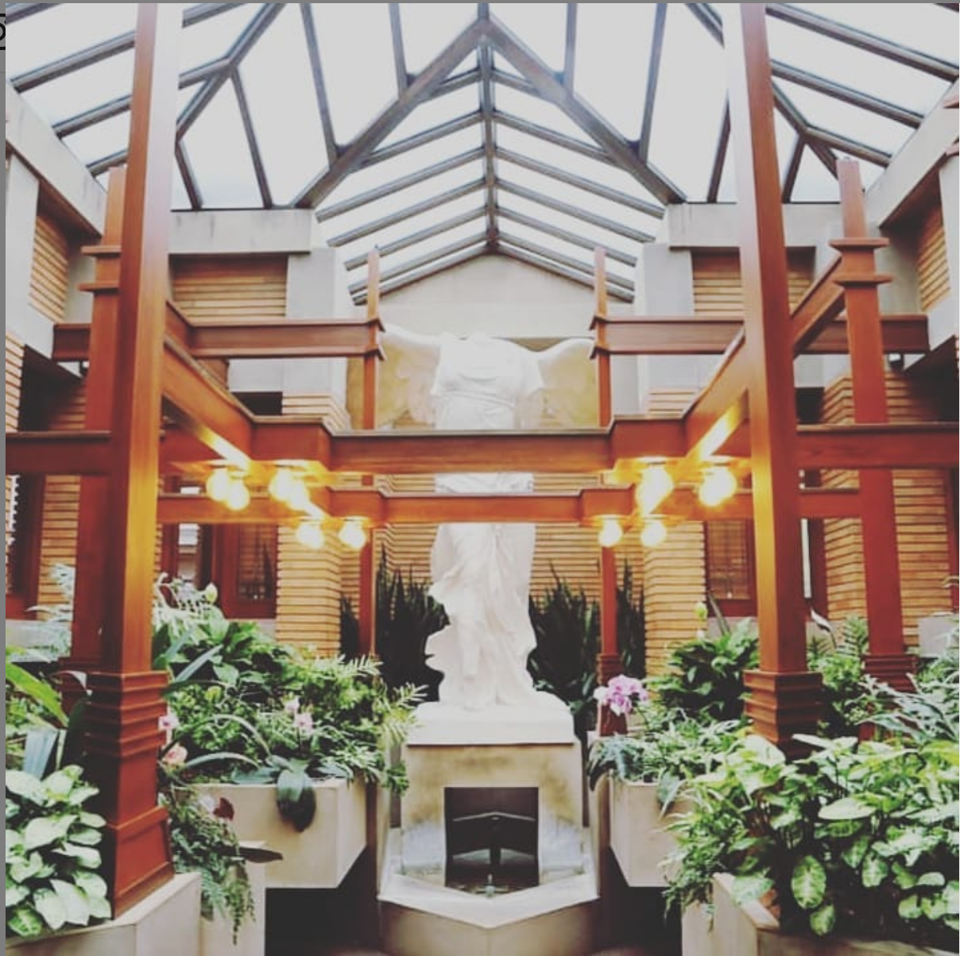 The Martin House received $24 million in total funding from New York State beginning in 1993, and Governor Cuomo closed the gap with a $5 million commitment. Those final funds were used primarily to rehabilitate the historic landscape, preserve the George Barton House (1903) - the secondary residence on the estate - and complete the restoration of the second floor of the Martin House.

"The Darwin Martin House is one of Western New York's most iconic attractions," said Governor Cuomo. "The restoration of the historic landscape is an outstanding addition to this important piece of Buffalo's growing architectural tourism industry."

Wright's Martin House is an important example of the legendary designer's vision to create organic architecture that promotes harmony between the built environment and the natural world. At the Martin House estate, the multiple structures, extensive furnishings and decorative elements combine with the lavish landscape to create a unified, interrelated design composition. The historic landscape has now been fully realized with the placement of thousands of floral plantings, as well as trees, shrubs and vines, which artfully blur the lines between the buildings and the exterior spaces.

The historic landscape represents an important contributing feature to the overall significance of the 1.5-acre multi-residential city estate. Wright created homes in harmony with nature. He developed an integrated design approach unifying buildings, interior decorative elements and exterior landscape in an organic style, deriving inspiration from the natural world. The Martin House landscape plan combines formal aspects of the English Garden tradition and informal landscape elements. Wright arranged the Martin House plan to frame the trees and gardens beyond the walls and windows with each space open to views outside and artfully giving landscape features a presence within.

Martin House Executive Director Mary Roberts said, "The Martin House is a project that has captured the imaginations and hearts of many. It is a symbol of what a community can do when it sets its mind to achieving something important. Thank you to New York State and to all our stakeholders for helping us restore and recreate Frank Lloyd Wright's vision for this masterpiece of architecture, design and landscape."

Frank Lloyd Wright is internationally recognized as one of the most important figures in 20th century architecture and design. His genius is marked by his vision to create a new form of American architecture based on the open landscape of the Midwestern Prairie. Wright redefined traditional concepts of space by physically and spiritually connecting the built environment to the natural world. He is best known for his "Prairie style" homes, efficient office buildings, and innovative furniture and decorative designs. As of July 2019, the United Nations Educational, Scientific and Cultural Organization (UNESCO) has voted to include The Twentieth Century Architecture of Frank Lloyd Wright on the World Heritage list. See an image of the Wright-designed Martin landscape here. See site plan and images here.

About the Martin House

Frank Lloyd Wright's Martin House Complex is a world-class masterpiece built for Wright's significant patron and friend, Darwin D. Martin, in Buffalo, NY, a city of architectural treasures. The Martin House Restoration Corporation is dedicated to preserving, interpreting, promoting and sustaining this National Historic Landmark and NYS Historic Site for the significant educational and economic benefits that it represents for the City of Buffalo, the County of Erie and all of New York State.

The Darwin D. Martin House Complex exemplifies Frank Lloyd Wright's Prairie House ideal and ranks as one of Wright's finest residential works. Designed for Larkin Soap Company executive Darwin D. Martin and constructed between 1903 and 1905, the complex is a one-of-a-kind composition consisting of the main Martin House, the smaller Barton House, constructed for Martin's sister and her husband, a carriage house with chauffeur's apartment, a gardener's cottage (added in 1908), and a spectacular glass-roofed conservatory linked to the main house by a 100-foot pergola (covered walkway), all integrated with the landscape that surrounds them.

The Martin House is open year-round and offers a wide range of tour, educational, special event and rental programs, and operates a museum store and café on site.  Information is available at www.martinhouse.org or by calling 716-856-3858.

Bayer Landscape Architecture, located outside Rochester, was commissioned to carry out the restoration of the historic Wright-designed landscape which includes:

The restored landscape is a new source of education programs and interpretation for tours, community events and dialogues about the importance of nature and design in everyday life. The landscape project also included site lighting, wayfinding, and a courtyard and café area.

Best Christmas Towns in New York State
In this article:   frank lloyd wright | cuomo |
Want to write for us? Submit your article. (Log in if you haven't.)