GlassBarge To Celebrate 150 Years of Glassmaking In Corning NY 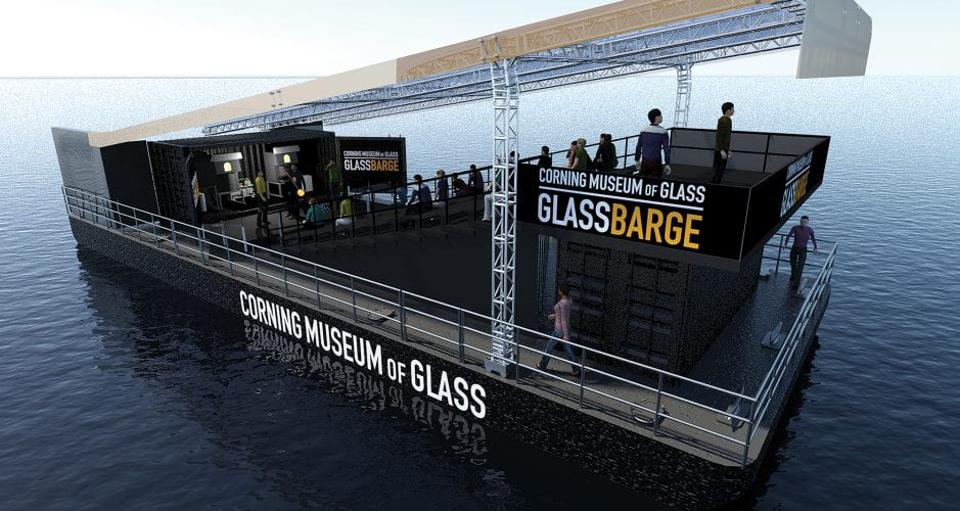 In May 2018, The Corning Museum of Glass will launch GlassBarge to celebrate 150 years of glassmaking in Corning, NY. GlassBarge is a statewide tour to commemorate the anniversary of the industry relocating to Corning from Brooklyn. In 1868, the Brooklyn Flint Glass Company relocated to Corning, via the New York Waterways and established the company it has grown to, today.

GlassBarge will retrace—and expand—the journey by traveling from Brooklyn to Buffalo and doubling back to head south through the Finger Lakes, all over the course of four months. According to the official website, during its four-month journey, GlassBarge will travel north on the Hudson, then westward along the Erie Canal from Albany to Buffalo, emphasizing the continued role of New York’s waterways in shaping industry, culture, and community in New York State. Stops will include Yonkers, Kingston, Albany, Syracuse, Rochester and Buffalo. In each port city, CMoG will provide free glassblowing demonstrations for the public from the deck of GlassBarge. The tour will conclude in the Finger Lakes, completing the journey by water in Watkins Glen. The tour will end with a celebration in Corning on September 22. 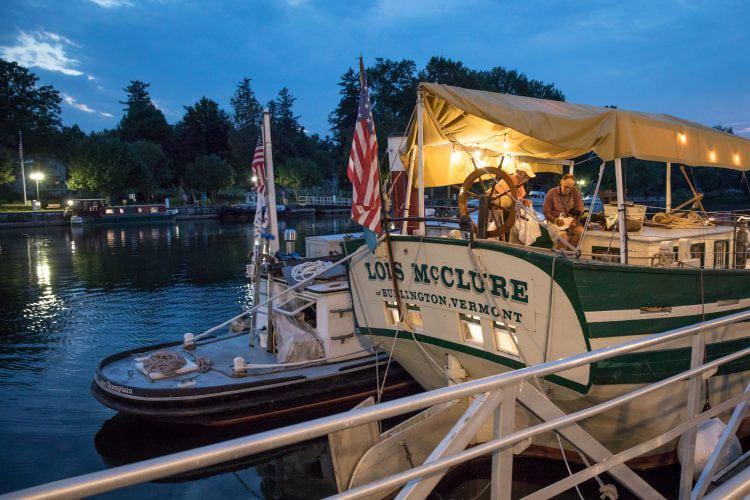 GlassBarge will feature one of the Museum’s mobile hot shops aboard a canal barge, from which free, live glass making demonstrations will be presented along the way.

In 1868, the Brooklyn Flint Glass Company’s equipment was loaded onto canal barges bound for Corning, NY. Once established in its new home, the company evolved into what is today known as Corning Incorporated. Since then, Corning has become synonymous with glass, and glass technology developed there has shaped the modern world. From the first electric light bulbs for Thomas Edison and the invention of optical fiber for telecommunications, to the glass used in modern flat screen displays, the way we live our lives has changed because of Corning’s advancements in glass.

“The 1868 trip on the Hudson River and canal systems of New York State launched 150 years of glass innovation in Corning,” said Rob Cassetti, Senior Director, Creative Strategy & Audience Engagement at CMoG. “The success of the company led to the opening of The Corning Museum of Glass in 1951. We’re honoring this occasion by taking innovations developed by CMoG—namely, our patented electric hot shop and mobile hot glass programming—back to its roots: that notable journey along New York’s waterways,” he added.

The tour coincides with the Erie Canal’s Bicentennial (2017-2025)—for which GlassBarge is a 2018 signature event—as well as the centennial of the commemoration of the Barge Canal in New York State.

GlassBarge will be moved along the waterways by the historic tug W. O. Decker—part of the fleet of the South Street Seaport Museum. Also accompanying GlassBarge on the journey will be the Lois McClure, a replica of an 1862 canal barge, and the C. L. Churchill, a 1964 tugboat, both part of the permanent collection of the Lake Champlain Maritime Museum.

Here is an interesting 3 minute video from The Corning Musuem Of Glass, "Introducing GlassBarge":